I wrote this post last spring, but never published it. It all still stands; let's celebrate Frida's Gotcha Day with her debut.
Because I've been away for so long, things have happened that you may not have heard about. Last June, we lost Stella. In early December, we realized how much we miss the pitter-patter of little feet. We had a few weeks off coming up so we started looking in earnest, filling in applications, and meeting and greeting. The first dog was a hard no with the dude. You may remember that Stella was a bit of a handful, so he was really wary. This new dog was a bit rambunctious (he called it aggressive). The second dog was a no from me. He was described as a "perfect" dog by the foster, but when we met her and her husband (and the dog) little issues came leaking out. I mean, I didn't believe he was perfect but he sounded pretty good. He was...a hound. And those who love a hound, love a hound. The rest of us know they are independent and difficult to train. As we walked him, it was difficult to even get his attention. We talked more with the fosters, and we all agreed he wasn't the right dog. (It was like the mutual breakup on Seinfeld.) We talked about what we were looking for and they agreed to keep an eye out for us. Unbeknownst to us, the first place was also keeping an eye out. And that's how we met Frida. 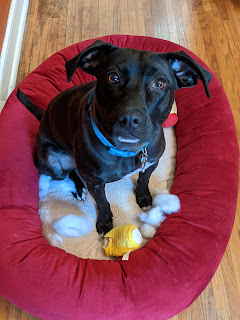 Unfortunately, it took us into January to find her, so we were only home for a few days before we went back to work. And she had hookworm so she couldn't go to daycare. Nevertheless, we persisted.
The Embark DNA test tells us she is 45.6% mountain cur, 37.8% pit bull, and 12.2% American Staffordshire terrier. And 100% lovable dufus.
She is a very cuddly, 38 lb lapdog. 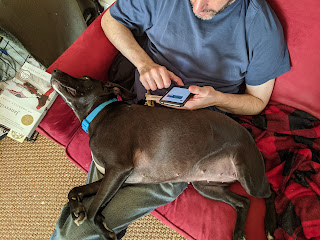 If Stella was a Ravenclaw (and she was so smart), Frida is a Hufflepuff, friendly and loyal. But she also does a spot on imitation of Dobby. 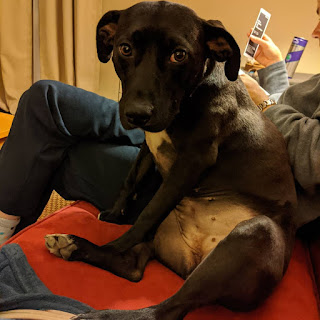 Posted by Anna van Schurman at 11:19 AM 6 comments:
Email ThisBlogThis!Share to TwitterShare to FacebookShare to Pinterest
Labels: gone to the dogs

Just in time to put the ornaments away, I finished two Arctic Circle Santas--Nunavut Santa and Greenland Santa.

I finished stitching Nunavut after um ... five years, started for Debbie's Crazy Ultimate January Challenge. I also want to correct my previous statement that the sable and pebble beads were in the same pack. The pebble beads were sort of gray-brown and I was using them as if they were two different beads because I can't read instructions. Once I realized my mistake I was too far along, so no sable beads appear in this piece. Oh well. 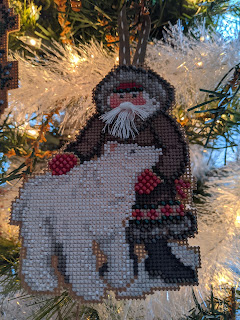 I finish-finished (um, glued on felt backing and cut out) Greenland Santa which I finished stitching in 2016. You all, there is some sadness in that craft room-cum-home office. A number of unfinished projects of all sorts. Now that I'm hanging out in there regularly (like many, I have been work from home since March 13) I'm feeling more compelled to get stuff done. I'll keep you updated about that vague goal. 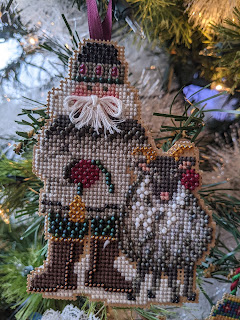 Tradition (You should sing that)

One tradition that I didn't let this year get in the way of was stitching an ornament for my nieces. 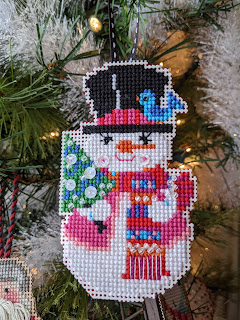 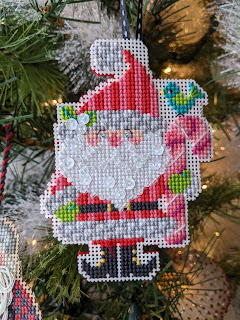 These are Snow Buddy and Candy Claus from Satsuma Street. They stitched up quickly. And they are such fun, happy colors. I bought all the patterns for this set, and I might stitch the deer for myself because it is so mid-Century modern. A blue deer! I tell you what will they think of next?

Stitching these put me in the mood to stitch on perforated paper. I picked up Nunavut Santa (which I have been stitching since 2015?). There was less than an hour to do on the stitches. I have started beading and Mill Hill is trying to kill me by putting 02056 (sable) and 03011 (pebble gray) in the same bag. They also put green and black in the same bag, and I tell you the older I get the less funny this is! Maybe I'll have a finish to show you soon because it is embarrassing that I have been stitching on a 51x68 piece for FIVE years!

I did not mean to be gone for six months, but I was reading instead of stitching for a while.
I made some cards, and I thought I'd share them tonight. 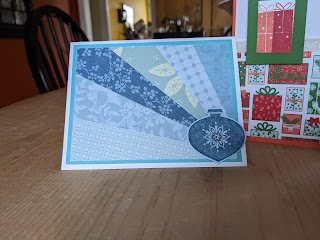 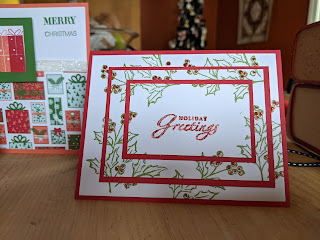 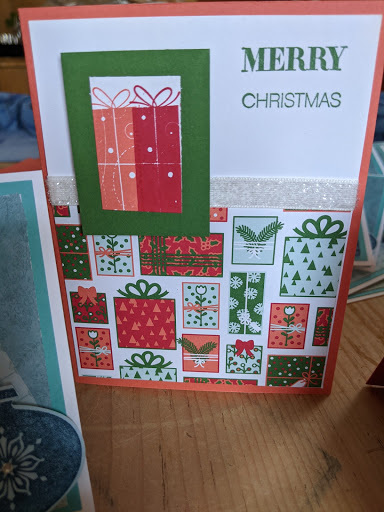 Although my mother is at my sister's and my aunt and cousins will be joining them, we are sitting out this Christmas. We're planning on having a Feast of the Seven Fishes, just the two of us. It's not our tradition but since we're not eating with the pescaphobes this is our chance! Our fishes (seafoods, for the pedants): anchovies, lox, shrimp, mussels, scallops, codfish cakes, and squid.
Then we'll watch the Patrick Stewart Christmas Carol while drinking hot chocolate.
I hope your holiday is all wonderful, and if your usual traditions have been hijacked by 2020, you find a new way to celebrate. Best wishes!
Posted by Anna van Schurman at 3:40 PM 5 comments:
Email ThisBlogThis!Share to TwitterShare to FacebookShare to Pinterest
Labels: cards, Christmas 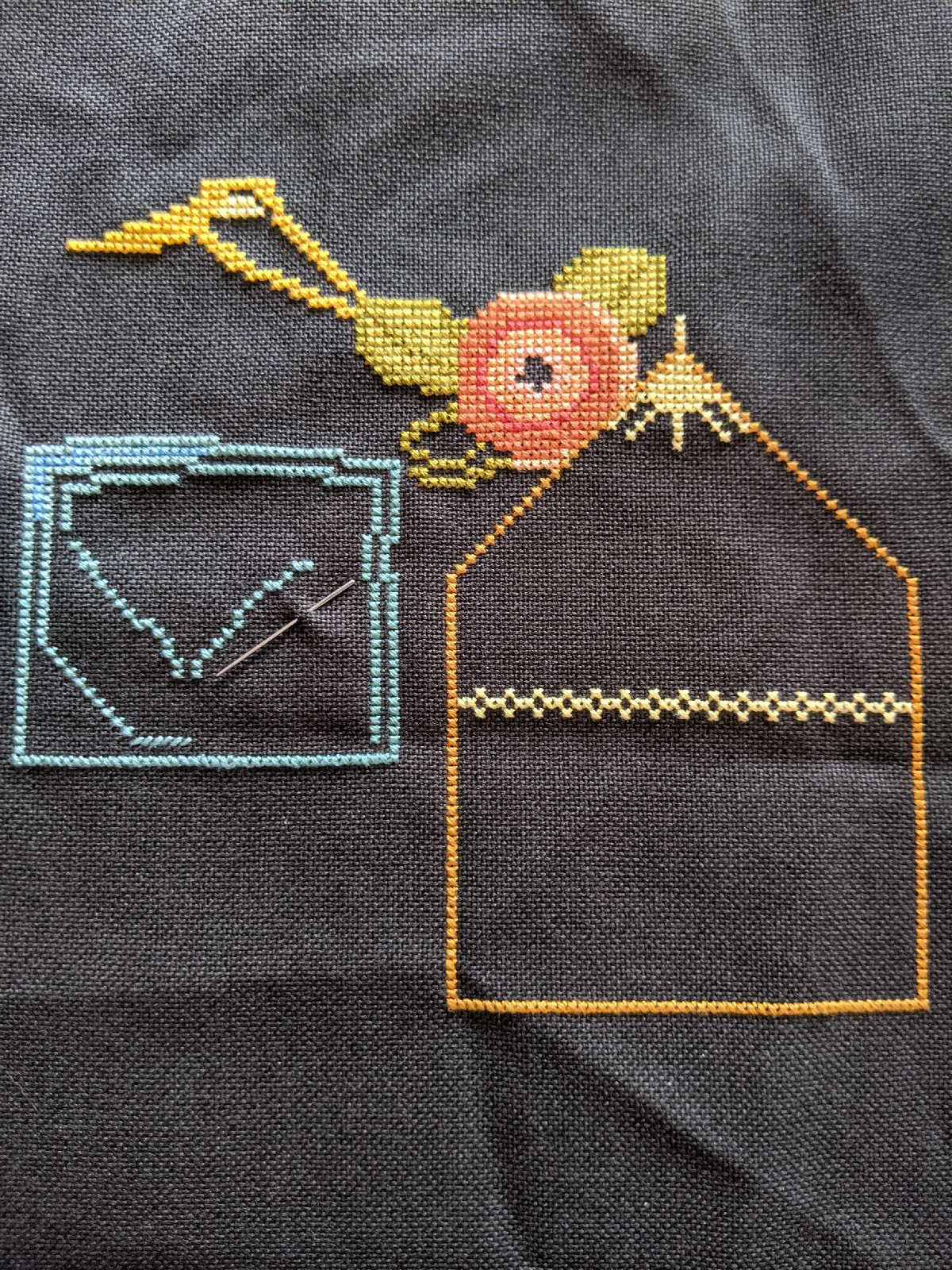 You know how when you forget to save what you've just written and you have to rewrite, you lose all enthusiasm? Yeah, that.
This is Good Huswife's June Morning. I started it in January 2014, and the last time I stitched it was November 2017.
I've been working on projects one at a time these past few months, but I think I can attribute that to just having a little bit to do on each (say, one or two weeks worth of stitching). This one has a lot further to go, and I've had a Big Idea percolating for a while. So June Morning may be abandoned soon. It seems like I should stop at the end of June anyway.
Posted by Anna van Schurman at 4:09 PM 5 comments:
Email ThisBlogThis!Share to TwitterShare to FacebookShare to Pinterest 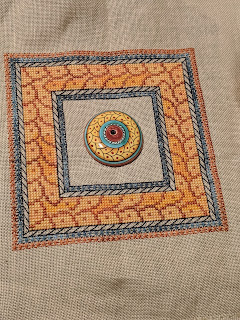 I have completed the stitching for the Deruta biscornu from Giulia Punti Antichi. I popped the majolica bead (button?) on there so you can see the echoes. Seeing it this way,  I maybe should have changed the Peacock GAST that I used to something a little more aqua. Never mind, it's the Eighth Finish of Inside Time.
Last weekend has brought me such great hope. In our town, a handful of high school students organized a demonstration against racism and police brutality. About 2000 people showed up. During a pandemic. In part it's that people showed up. But much more importantly, it's the youth of the organizers. Something tells me change is on the way.
Posted by Anna van Schurman at 7:09 PM 6 comments:
Email ThisBlogThis!Share to TwitterShare to FacebookShare to Pinterest
Labels: biscornu

I feel like I should acknowledge the fire this time, but I don't know what to say. I've been thinking a lot about the unrest in Los Angeles in 1992. (I wrote about that here.) In some ways this is so much the same. But in some small ways it feels different. This time, I've seen white people acknowledging systemic racism publicly, that Nike commercial, the cops speaking out against other cops... But will this lead to us crawling out from the depths of racism? Will we right past wrongs? Demilitarize the police? Reweave the fabric of our society? I hope so, and I will do what I can to contribute to a new America. 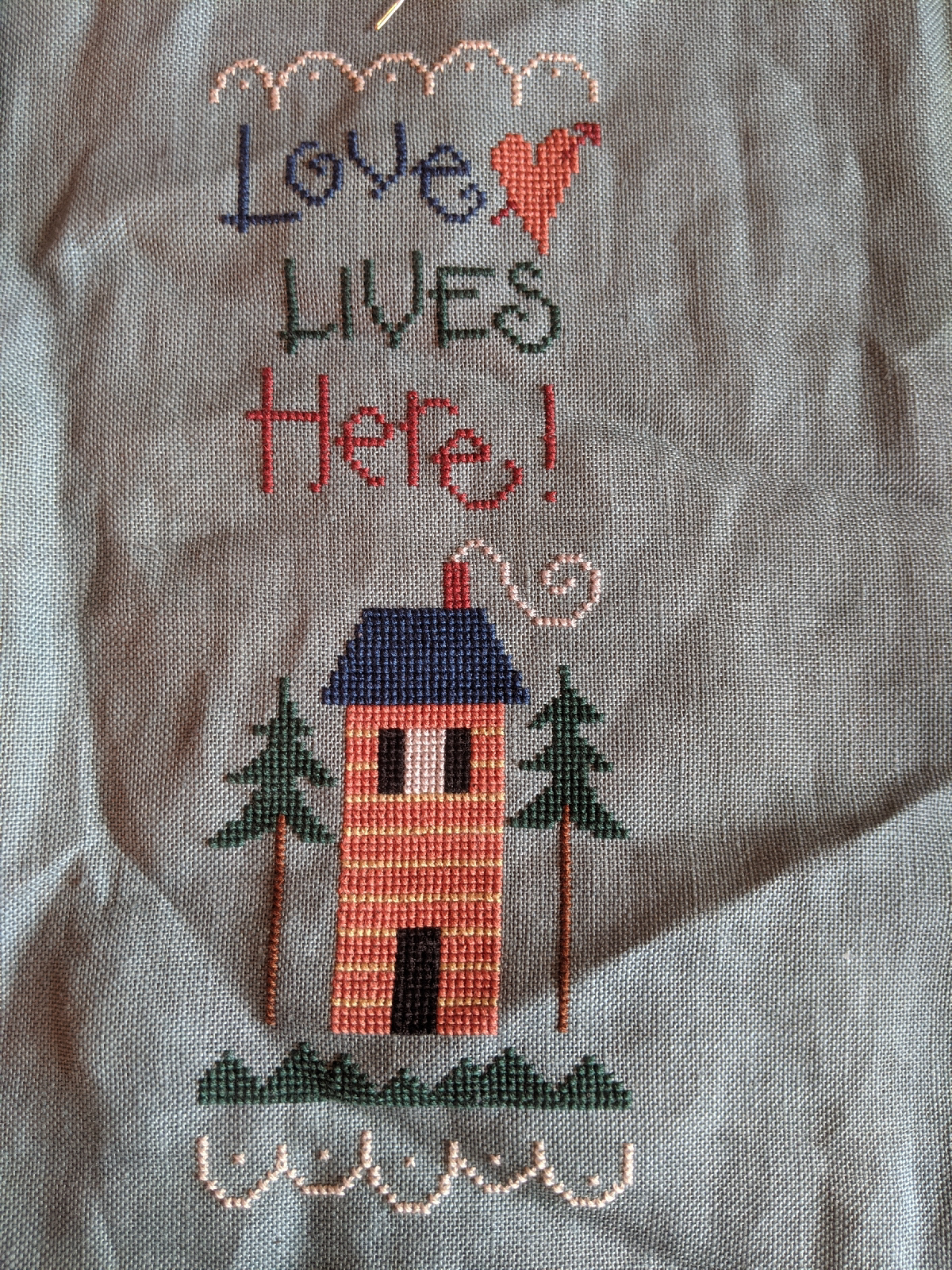 As you can see from my latest finish, Love Lives Here, a freebie from Lizzie*Kate, I have not started a pandemic stitch. This piece was started for the 2015 Ultimate January Challenge. It is almost done, there's supposed to be a bird on the roof. I've ordered a couple of JABCO bird buttons to use instead. 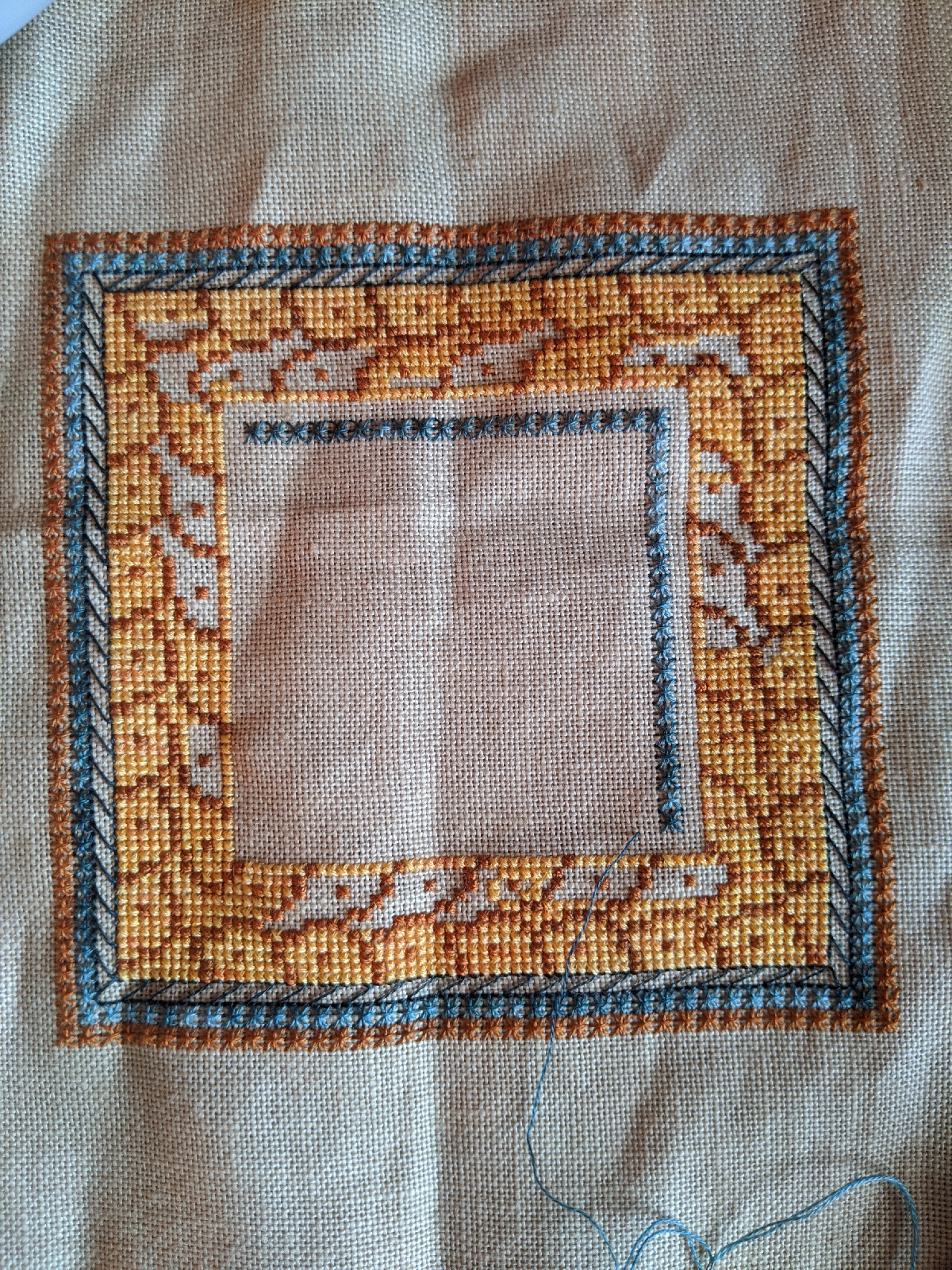 I've also been working on the Deruta biscornu from Giulia Punti Antichi. This is very close to being done but I ran out of that orange color (GAST orange marmalade). I found another skein in a project bag but it's slightly different. At least I had the foresight to leave some unstitched areas around the whole piece so the new skein will blend in.
Maybe I'm learning a lesson, but I'm not making any promises about what I'm stitching next!
Posted by Anna van Schurman at 7:19 AM 5 comments:
Email ThisBlogThis!Share to TwitterShare to FacebookShare to Pinterest
Older Posts Home
Subscribe to: Posts (Atom)