Here we are, 2018. Before we look forward, a stocktaking. Though there wasn't much stock to take. I finished five pieces--Ortilda the Witch, Tada Santa and Snowman, Wabbit's Wonder, and Christian's Stocking. 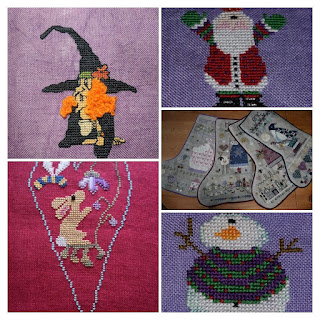 Stitching did pick up in the latter half of the year, so I am hoping that is the trend for the future.

I am joining Stitching Lotus's Smalls SAL for real this year! (Last year I said I would stitch smalls but I didn't even change the link from 2016 to 2017. But look, it says 2018!) I plan to do a rotation, but I think I'm going to do fewer pieces for an extra day so seven pieces for four days each instead of ten pieces for three days with occasional theme months, like in February (Valentine's Day!) I'm going to focus on anniversary pieces*, and of course, Craft Month in March.

I also plan to blog more, and visit your blogs more often too.

For my January rotation, I'm going to start with seven smaller pieces so I can feel like I'm making headway!
What are your plans for the year?

Happy New Year Anna and Family: You have some nice finishing's for 2017.
I look forward to seeing your progress in 2018.

Your finishes look great. I look forward to seeing your projects for January's rotation. You can do it.

Love all your pretty finishes for the year Nikki.

The gorgeous stocking is worth several smaller finishes!

Good luck with your 2018 plans, both blogging and stitching.

Good luck with your rotation plans. I also want to stitch more ornament sizes peices this year, my stitching was not plentiful last year.

Happy New Year! Ortilda turned out fab and all your finishes are lovely. I like your idea to focus on smaller projects in January, I hope you get a few finishes!

Good luck with your plans for the new year.
Lovely finishes you had this year.

I've become very bad about commenting these days, but here I am. Great finishes for 2017! Hope you reach your goals for 2018, but more importantly that you enjoy doing it! Happy New Year!

Lovely finishes, Nikki. Have a lot of fun with your 2018 stitchy projects. Your rotation plans sound doable. Good luck with them.

Happy 2018! May it be happy and stitchy. Love your 2017 finishes, especially the stocking. Maybe when I get my WIPs under some sort control I'll start stockings for the kids.

Good luck with your stitching plan for 2018 - I'm still trying to put together one. I think cleaning and organizing the craft room is the best way to start.

I'm hoping to stitch more this year too! All of your finishes are lovely!

Well, five finishes is better than zero, right? And they are all so cute--especially that stocking! My stitching total was way down, too, but that was just due to all I had going on in my life. Now that I'm retired, I hope to have more time to stitch, but also want to get to a LOT of books piled up beside my bed :)

Wishing you a most happy New Year, Nikki!