Where the Hell Have You Been?

Dear Friends, I have been away for weeks, and I'm sorry. So much I wanted to do--keep you up to date with my rotation stitching, wish our friend Jo a Happy 50th Birthday (my own is not far behind), check in with the Spinster and our dear pal Stewie, but it's just been busy. (I can't comment from my phone, and this drives me nuts!)

The dude is hogging the computer with his "work." (It's actually real work, a second job no less.) (I apologize for the sarcastic quotation marks.) I had to go away for work last week, and I thought for sure I could catch up but I was delusional. So here we are. I'm supposed to tell you about my stitching small, but I fear that will have to wait for Saturday. (It's not quite done. And tomorrow is Stamp Night.) 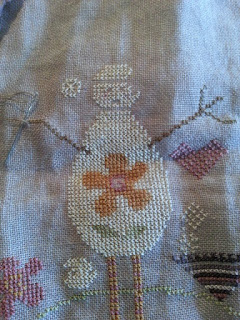 When we last met, I was picking up Wisteria Snowman from Shepherd's Bush. She was headless then. Not so headless now...This is about the time my parents' DNA results came in, and I was trying to find my mother's father's relatives. We need more Eastern Europeans to jump on the bandwagon, alas. (My mother is a veritable stew of peoples. Including trace amounts of DNA from North Africa, South Asia, and indigenous America. My father is not as French Canadian as we thought clocking in at 57% British and Irish!)

I next picked up Christian's Stocking because I thought I was going to be able to get this done for Christmas. I haven't picked it up since January 2015 when I was in the throes of Debbie's Ultimate Crazy January Challenge. Now it looks like this: 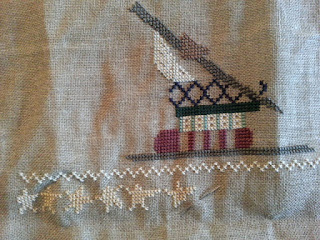 During this three day period, I was also attending Cookbook Club (Chasen's Chili from A Twist of the Wrist) and trying to salvage the overload of pears we got from the farm share. (I made pear sauce, which is like applesauce, but we all need to make it more often so pearsauce becomes a thing I don't have to explain.) 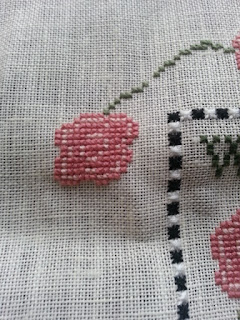 I moved on to Our Souls but I was in the midst of getting a flight for my Big Birthday Trip that my mother and aunt and I will be taking in February. More later. I was also attending meetings for my volunteer work and preparing the invitations for my Big Birthday Celebration. This poor sampler got so little attention.

I moved on to Cinnamon Stars but with only one day of stitching, I'm not sure it's worth the photo.

When I went off to Pittsburgh for the conference, I brought a small, Lovebird, and Ladybug, Ladybug (it's been found!), but I only worked on the small...and I'm still working on the small.

So there's been a little stitching and a lot of thinking of you all. I think that catches you up!

Good to see you and your stitching popping in! Pear sauce sounds delicious. Hope you have some 'me' time this weekend!

Being a stitcher and a genealogist - I know it tears you in many directions. If you need help for the genealogy, let me know, I'll be happy to help.
Jackie

It's the unwieldy living business - gets in the way all the time! Your calendar does sound rather overloaded. I hear you about the genealogy, I sit down to just check out one thing and the next thing 2 or 3 hours have gone. Good luck with it all.

Yay, you're back! Nice to see your great projects and read about what's been happening with you!

Hope you can fine more time to craft in October and life slows a little for you.

Gosh, you have been busy! Thank you for remembering my Birthday, the blog hop is still there if you want to read my life story!
Can't wait to hear what you have planned for your Birthday now.