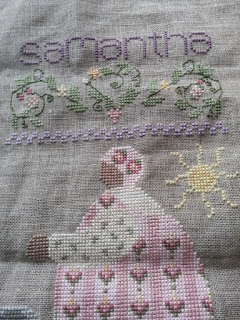 I've gotten somewhere with Mary on this rotation. The top is nearly finished--just a couple more leaves and one small tendril on the left. I had had to fudge things a bit on the right side, and as I was moving swimmingly along on the left side, I was thinking that I was going to have to fix my mistake. Then, I came to the realization that I made a similar mistake on the left. Problem solved! (Here's how she looked last time.)

I was also able to stop off at the LNS and get the right color for her face and hand. So I quickly filled those in.

The M looks disproportionate in the name, but it's just a fold in the fabric distorting it.

What a pretty stocking, Nikki. Her dress reminds me of shabby chic wallpaper and is so sweet and girlie. Samantha will love it!

Fabulous progress on the stocking! Glad Mary wasn't so contrary this round!

What a sweet design! I look forward to seeing how it looks finished!

Samantha is going to love that sweet stocking!

Looking good! Nice to find out you're consistent in your mistakes.

Loving this one, so cute