I Love This Project...Finally, Me

I Love This Project 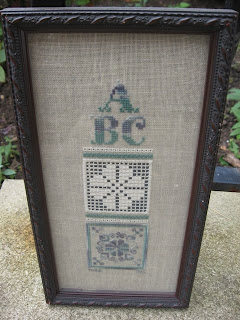 Like many of the wonderful women who previously graciously shared their favorite project, there were many projects I could have chosen. When you visit me, I can tell you in tedious detail what some of them were. In the end, I chose this project by Sue Stokes.

I took several classes from Sue at the Spirit of Cross-stitch Festival. (I'm even still working on one of them.) Sigh. Those were the days! SOCS was huge! Valley Forge was inundated with shop owners and pattern companies. Cross-stitch was too big to fail... But I digress. I took this class to learn lacis. I found it relaxing and surprisingly simple. All right, I'm not going to lie to you...wrapping the linen threads to create the ground fabric for the weaving was a little tedious, but wow! what an end result.

At any rate I think I was in her class (Tulips, I think) shortly after I learned I would be going to Poland to teach English as a second language with the Kosciuszko Foundation. I would be teaching English from 9-12--three sections, four days a week. In the afternoon, I would offer an "activity" twice a week; I decided on stitching. I made an announcement in class to see if stitchers would be willing to donate items for the students to use. (I also posted on rctn.) Oh the generosity! Sue told me I could teach one of her patterns. She provided 20 patterns and gave me contacts at Zweigart and DMC to get the materials I needed. Everyone came through. In addition to the linen and floss the companies donated, I went over with yards of aida from stitcher's donations. Yards. And hoops, needles, and floss.

The program director assured me that all little Polish girls were adept with a needle. So Sue and I had chosen an intermediate project.

This teaching opportunity came at a sort of crucial time for me. I had recently been diagnosed with ulcerative colitis (and "they almost hadn't taken me on," according to the director). I was trying to figure out how to have a "new normal" life. I also was feeling inadequate as a teacher. My teaching evaluations had improved, but they weren't great. It was the hardest thing I had ever done and one of the few I wasn't wildly successful at. (Waterskiing was another.) (It turns out dog training may be the third.)

When I arrived in Tczew, I put out a copy of the pattern so that students could sign up for my activity. I told them that if they signed up, this class would run all three weeks and they had to commit.

Expecting 20 or so students to show up, I was a little overwhelmed when 40 people did--including the Polish teachers. And despite the assurances, none of the (high school aged) students had ever stitched, though one had a mother who did. Yikes! I made copies of part of the chart, and cut up a bunch of 18 count Aida. I showed them how to make an ex, and they were off practicing their ABCs.

At the end of that first day several people had dropped out because they had been "stitching for hours and hadn't even finished three letters!" In the end about 18 students committed to the project (and none of the teachers).

Things went rather well. Unfortunately, we only had three pairs of embroidery scissors. Sharing the scissors was a little difficult, and students would revert to Polish to ask someone to send the scissors their way (it was supposed to be an immersion program). I did learn to recognize the word scissors in Polish. (I've since forgotten it.) I was a hard-ass and didn't even let them make little scissor motions with their hands. When I caught them, we all said the word scissors together. If they learned nothing else, they did learn how to say scissors in English. It will serve them well when the immigrate to Chicago.*

I learned a lot about myself as a teacher. I'm a fabulous teacher, but I do best when I'm not required to grade my students, when what we're doing is just learning something together. Maybe I'm more of a coach or, appropriately, a cheerleader.

And they did learn. In addition to teaching this class, I used the aida and floss that I received to teach another stitching class, where students stitched things from "Two Hour Cross Stitch," a book that I had brought with me. One student even stitched me a trio of teddies.

Unfortunately, the day I brought my camera to class was the day everyone begged off to go swimming. The weather was fine; camp was ending; they wanted to swim with their new friends. Since everyone had at least started the needleweaving on the lacis--and thus had learned all there was to learn to complete the project--I encouraged them to go have their fun. (It was after all one of our few sunny days, and most of the students had come to Tczew because it was the closest they would get to the coast.) So that's why there are so few students in this class photo**. 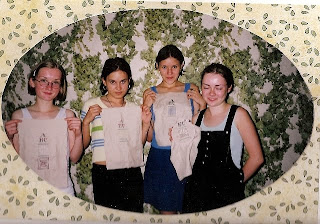 In the end, one girl completed the project in a mere three weeks: 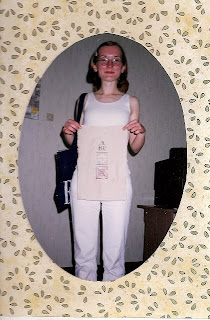 Look how proud she seems!

Oh gosh, I totally forgot that this was also one of the first projects I changed colors on! Yup. The students' projects--with "Victorian Christmas" Needle Necessities floss--are the charted colors. Mine has less contrast, but I was a little tired of that 223/502 combo. So I guess the reason I love this project is the students who loved it too.

*I was supposed to introduce them to some aspect of American culture, and since I lived in Los Angeles among the immigrants, I thought what better way? We read all kinds of essays by immigrants, and not all of them happy. When the program director showed up in my class, hearing that we were talking about immigration, she said she hoped no one immigrated. She wanted them all to stay and make a better Poland. And well, she clearly missed my point too. Shortly after, I fell down a flight of stairs and had to have my ankle casted. I blame her.

**You'll have to forgive these scrapbook scans. This was my first scrapbooking project, and I did insane things like cut the photographs and glue them onto the paper. (These days, I'm much more archivally sensitive.)
Posted by Anna van Schurman at 9:21 PM
Email ThisBlogThis!Share to TwitterShare to FacebookShare to Pinterest

Nice project, Anna, and the accompanying story was very interesting. Wonder how many of your former students are still doing any cross stitching.

Ah, the heydays of the large cross stitching festivals. Only got to attend one very large festival, but I enjoyed it immensely. Maybe I'll be fortunate enough to attend another one someday.

What an interesting story this is. I'm sure that some of these students are still doing cross stitch as it's always very motivating to learn it from someone who is inspired. I can say that out of my own experience, lol.

What a fascinating story. I had no idea you'd taught in Poland. I did't know you did lacis, either, though that could've been because I don't always pay very close attention (I blame the kids and dogs for my constantly scattered attention). The project is gorgeous and the story is wonderful.

What a wonderful story. Lovely project, too!

What a great story and a great piece! And a great experience for both you and the students that you had!

That's a wonderful story Anna. Even if one student from that class continues to stitch it is hope for future generations. Congratulations for spreading the hope.

Great story! You've done some very interesting and challenging things in your life. I went to SOCS in Valley Forge also. I didn't know a soul but found roomies through a bulletin board. I still have stash from SOCS!

Ooh, how exciting! And thanks for sharing *your* favourite project and the story behind it. It is a beautiful piece and I simply love the colours.
Ha! I taught Dutch as a foreign language in Wales and I was as succesful as I am at training my cat. Which is just as succesful as you claim to be as a dog trainer :o)

I will try to find out the Polish for scissors from one of my colleagues Eva.

Very interesting story, we have many Poles in the UK now, although with the hard economic times some of them are returning to Poland as work is not so readily available in the UK.

I find teaching very challenging, I now consider myself an explainer, a la CommonCraft.

What an adventure! I can't imagine going to Poland to teach anything, let alone cross stitch. I'm sure you learned a lot.

In the olden days, when we were allowed to have some fun at school, I used to teach my elementary students to cross stitch the week before Christmas vacation. The kids I had back then in the classroom were from eight to ten, and they loved stitching. We used monk's cloth to make little ornaments. The most amazing part was how busily quiet the classroom was. They would stitch and visit quietly, and we'd have such a lovely time finding out new things about each other while learning a new skill. Ah, the good old days.

Your favorite project is beautiful.

Thanks for sharing ~ I enjoyed reading both and seeing your project!

That's a pretty cool story. I only managed to teach one German girl in my three years in Germany. But she's now American and is still stitching.

This is a lovely story, Anna.

It leaves me with a gentle smile.