Our Souls are Procrastinators 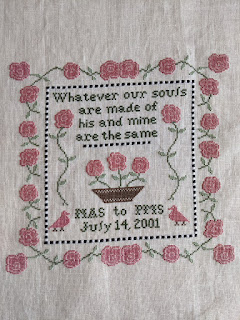 Midsummer Night Designs, Our Souls
Stitched on a fabric I didn't record, nor do I remember
Called for Anchor flosses.

Reader, I married him. 💗💗
Posted by Anna van Schurman at 3:12 PM
Email ThisBlogThis!Share to TwitterShare to FacebookShare to Pinterest
Labels: anniversary

A beautiful sampler regardless of the timing! I’d have thrown in the towel and not stitched all those fabulous outer roses. Good for you for sticking with it. Loved the look back at your other anniversary gifts!

Thank you for sharing the links to the years in between! I enjoyed the walk down your memory lane of anniversary gifts. Nikki, 2014's is gorgeous. Have you picked the one for 2020? Looking forward to seeing your choice! I hope you have a peaceful week.

It looks beautiful:D And your husband sounds like a keeper :DD

Congratulations on the Happy Dance for the lovely sampler! Well worth waiting for.

Digital Printing Rawamangun said...
This comment has been removed by a blog administrator.
8:46 PM

What a lovely sampler, no matter when the anniversary is!