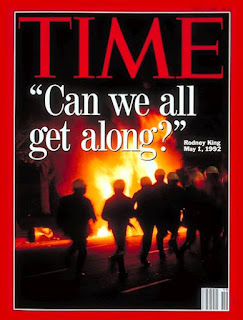 I remember exactly what I was doing twenty years ago today. It was a Wednesday. I had spent the day grading papers. I was teaching Freshman Writing at the University of Southern California, and we did this group grading thing to help ensure that grading across the sections was equitable. Our group finished at about 3:45. I needed to have a prescription filled, so I went to the student health center where I overheard two African American women saying that they couldn't believe they had gotten off. Even with no context, I knew exactly what they were talking about. Anyone in Los Angeles would have. We had all been thinking about it. Waiting. Expecting the opposite.

I took the shuttle back to my dorm in downtown. LA's downtown at that time was mostly a place where no one lived. There were very few places to eat. Almost none were open for dinner. When the business people went home, the sidewalks rolled up. It didn't matter to me; that was one of the nights the dorm served dinner. (It was an unusual graduate student living experiment; communal dinner was only served a few nights a week.) I ate and went back to my room to calculate final grades that were supposed to be turned in before Friday. It was warm in my room. I opened the window. Weird...I smelled smoke.

Later I noticed I had a message. My sister: "I just wanted to make sure you were safe. Call me." I called the dude (we had been dating for just about three months and he lived two floors up). He didn't know anything. I went to my next door neighbor, who had a television. The city was on fire. At least that explained the smoke.

Thursday was another bright and sunny day in Los Angeles. Classes were over, and so a group of people who lived in the dorm went out for lunch. We went to Hamburger Hamlet. Normally it would have been a huge wait behind long lines of businessmen. That day, we were seated right away. We lingered over lunch. Finally, the manager came over, "When you leave, we're closing and sending everyone home." We could take a hint; we left. On the walk back to our dorm we noticed handwritten signs in all kinds of businesses. Places were closing early. I was on the phone with my parents when I noticed the Lady Footlocker next door being looted. That night, no dorm dinner. Fortunately for us, The Pantry has never closed. (Not even for the unrest.) A few friends called me and offered to come take me away from downtown. But in the end, the places they lived (Santa Monica and Pasadena) would not escape unscathed. That night the rioting continued.

On Friday, Rodney King asked if we could all get along. Those of us who remained--loads of people had gone home--were in lock down. USC's administration sent food for us. And the R.As had a series of movies for entertainment (which is why I will always associate When Harry Met Sally with the riots). USC put forth a policy for the outlying dorms: they told us to pack a bag and be prepared to evacuate to campus. Those of you who know USC will perhaps find that counterintuitive, bringing us into South Central for the emergency. But USC had (has?) the only riot trained campus police in the country.  More security officers who were licensed to carry were sent to our dorm. On Friday night, I moved to the dude's room because my room faced the street. I remember listening to the helicopters and asking if he thought this was what it was like to be in a war. (Perhaps, in retrospect, a bit overwrought.)

On Saturday, the Marines came. The President had promised a federal investigation. There was a Peace Rally. It was strange, but you could feel that there was a change in the air, and to me, it seemed not to come from the Marines or the President, but from the Angelenos themselves. On Sunday people started cleaning up. It wasn't over, but it was.

Twenty years ago today.
Anna van Schurman at 10:28 AM
Share